TABC Pronto is great. So easy to use. And they have the cheapest TABC certification and Texas Food Handlers Card combination I've ever seen. Will be using them as long as I'm serving.

Working in this industry for years from being a server, cocktail waitress, bartender, and then bar manager, I've had to get my TABC certification and Texas Food Handlers Certificate multiple times. TABC Pronto easily has the fastest courses and for cheap. I'll be using them again.

I've used several other online TABC certification courses before but TABC Pronto was super fast and easy to use. Not to mention I did it all from my phone. I'll definitely be using them again.

This is the fastest online course I've used to get my TABC certification. It also doesn't hurt that it's super cheap!

I'm so glad I found TABC Pronto. This is the cheapest I've ever paid for a TABC and Texas Food Handlers Card bundle. The course is very simple to navigate and easy to use. I'll be returning when my certifications expire in 2 years.

Many accreditations, skills, and attributes can work in your favor during a job application process. However, there’s one that stands out from the crowd, and that’s the Texas Food Handlers Card. The certificate provided for completing our food handler course is approved and accredited by the Texas Department of State Health Services (DSHS).

Those who undertake the certification process will be thoroughly prepared to enter the food handling industry, armed with all the information they need to keep themselves and others safe. So, what are you waiting for? It’s time to boost your career prospects with a Texas Food Handlers Certificate.

What Do You learn During the Texas Food Handlers Certification?

It won’t take you long to realize that having a food handler certificate gives you the upper hand in the job market, but why? What’s involved in it and what do you learn that will have real-life value? More than you think.

When you carry out the Texas Food Handlers Certification process online, you learn about keeping yourself and others safe. You will find out what it takes to keep your hands, body, and clothing clean to protect against contamination. You will also discover who are more susceptible to foodborne illnesses, and what symptoms and illnesses need to be reported to management.

But that’s not all. Those who work hard to get their Texas Food Handlers certificate will also gain an understanding of time and temperature control methods, how to prevent bacterial growth and the procedures for a clean and sanitary work environment.

Such new knowledge in any workplace that sells food can be of significant benefit to you, your employer, and those who buy the food you serve. 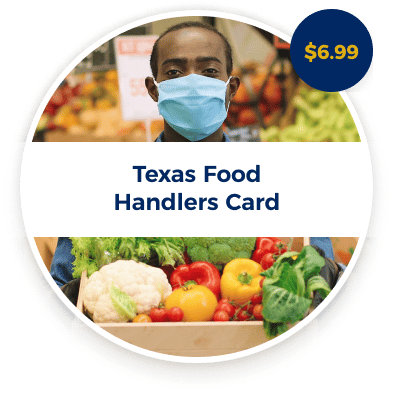 100% Approved by the Texas State Board of Food Handlers. 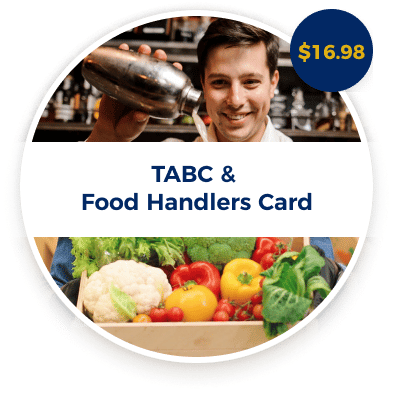 Bundle the TABC certification and a Texas food handlers card.

How Do I Know Which Accredited Training Facility to Choose?

You can’t just carry out any Texas Food Handlers course and hope it meets the mark. The Texas Department of State Health Services or ANSI has to approve it, which means you need to put thought into the best one to offer the certificate you require.

You can choose the best online Texas Food Handlers certification provider by understanding what the minimum requirements are. They must be approved by certain authorities to be valid in Texas. TABC Pronto ticks this box by being approved by the TXDSHS and offers high-quality online training to see you armed with the essential information you require.

Our online Texas Food Handler License course is designed to contain lots of pertinent information, while also being easily understood. We want servers and other food handlers to learn the information as stress free as possible. That’s why there is no test or final exam as part of obtaining your food handler certificate through our course.

How Can You Get Your TABC Certificate Online?

It’s easier than you might think to get your Texas Food Handlers license. Rather than blocking out scheduled time in a dusty old classroom, you can purchase the training module and certification online.

TABC Pronto, for example, offers the certification online for $6.99, or just $16.98 when bundled with the TABC certification.

Once you buy the course components online, you can then get to work, reading or listening through the information, answering questions, and learning at your own pace. You can click through the pages of the course as quickly or as slowly as you like, learning everything there is to know about safe food handling in the process.

Once you pass the program, you can receive your certificate via email as proof to your employer that you’ve put in the hard yards. The certificate TABC Pronto provides is your official certificate and the DSHS will not be mailing one to you as they did in the past.

Who Has to Get their Texas Food Handlers Certificate?

Many people might not understand just how important safe food handling can be.

According to the World Health Organization, around one in ten people fall ill annually after eating contaminated food – that’s about 600 million people. Approximately 420,000 of those will die, and children under five account for nearly 130,000 of those deaths.

With figures such as those in circulation, it’s paramount to view unsafe food practices as more than just an inconvenience. They can actually be a killer. The Texas Department of State Health Services understands that and since 2015, made food handler training a requirement – rather than just a mere suggestion.

According to the Texas Food Establishment Rules, if you are a food handling employee, you must undertake an accredited food handler training course within 60 days of employment. That includes employees who work with food equipment, surfaces that come into contact with food, or food in general. However, if you serve pre-packaged items, you may not be required to get your Texas Food Handlers certification. Instead, you just have to be supervised by a Certified Food Manager or someone with food handler training.

What Happens Once I’m Certified?

So, you’ve carried out your Texas Food Handlers Certification online course, passed, and have printed off your certificate.

Now what? You will need to take your certificate to your local health authority to receive your Food Handler permit. This card has your name, the program you used to get your accreditation, such as TABC Pronto, and either an ANSI logo or TXDSHS number.

The card is recognized state-wide as a form of proof for having completed the certification process. Once you have your card, you are certified throughout the state of Texas to work with food. Your food handler card will be valid for two years from the date printed on it. Once your card expires you will need to renew it by retaking an accredited course.

What Are the Benefits of Getting a Texas Food Handlers Certificate?

The prospect of having to study or undertake a new form of education can be daunting.

You might think it’s beyond your capabilities, or you don’t really see the value. Aside from the fact that getting certified to be a Texas Food Handler takes very little time, there is a multitude of other benefits too.

Firstly, it broadens your horizons. You will be far more desirable to employers who don’t want the hassle of having to encourage, coax, and ensure their staff has a valid food card. It also arms you with the knowledge you need to prepare food safely. Those who have undergone the training are likely to be more aware of cross-contamination, safe food practices and hygiene than someone who hasn’t.

Make yourself look as desirable as possible in the food handling and hospitality industry.

Choose an accredited training facility like TABC Pronto, and save money by purchasing your TABC certification at the same time. There’s no better time than now to up-skill and improve your employment prospects by obtaining a food handler permit!